What is Rust Cargo?

What are it's roles?

Rust Developers use Cargo to Manage their Rust projects because Cargo handles a lot of tasks for you such as:

Must all Rust Programs use Cargo?

No, the simplest Rust programs, like the one we’ve written so far, don’t have any dependencies. So if we had built the “Hello, world!” project with Cargo, it would only use the part of Cargo that handles building your code.

However, as you write more complex Rust programs, you’ll add dependencies, and if you start a project using Cargo, adding dependencies will be much easier to do.

How do you check if Cargo is installed?

If you installed Rust through some other means, check whether Cargo is installed by entering the following into your terminal:

If you see a version number, you have it! If you see an error, such as command not found, look at the documentation for your method of installation to determine how to install Cargo separately.

How to create a project with Cargo

The first command creates a new directory called hello_cargo. We’ve named our project hello_cargo, and Cargo creates its files in a directory of the same name.

Go into the hello_cargo directory and list the files. You’ll see that Cargo has generated two files and one directory for us: a Cargo.toml file and a src directory with a main.rs file inside.

It has also initialized a new Git repository along with a .gitignore file. Git files won’t be generated if you run cargo new within an existing Git repository; you can override this behavior by using cargo new --vcs=git.

If you open Cargo.toml in your text editor it will roughly look like this:

This file is in the TOML (Tom’s Obvious, Minimal Language) format, which is Cargo’s configuration format.

The first line, [package], is a section heading that indicates that the following statements are configuring a package. As we add more information to this file, we’ll add other sections.

The next four lines set the configuration information Cargo needs to compile your program: the name, the version, who wrote it, and the edition of Rust to use. Cargo gets your name and email information from your environment, so if that information is not correct, fix the information now and then save the file. We’ll talk about the edition key in Appendix E.

The last line, [dependencies], is the start of a section for you to list any of your project’s dependencies. In Rust, packages of code are referred to as crates. We won’t need any other crates for this project, but we will in the first project in Chapter 2, so we’ll use this dependencies section then.

How do you build a Cargo Project?

This command creates an executable file in target/debug/hello_cargo (or target\debug\hello_cargo.exe on Windows) rather than in your current directory.

How do you run a Cargo Project?

You can run the executable with this command:

To run the executable:

We just built a project with cargo build and ran it with ./target/debug/hello_cargo, but we can also use cargo run to compile the code and then run the resulting executable all in one command:

How to build For Release

When your project is finally ready for release, you can use cargo build --release to compile it with optimizations. This command will create an executable in target/release instead of target/debug. The optimizations make your Rust code run faster, but turning them on lengthens the time it takes for your program to compile. This is why there are two different profiles: one for development, when you want to rebuild quickly and often, and another for building the final program you’ll give to a user that won’t be rebuilt repeatedly and that will run as fast as possible. If you’re benchmarking your code’s running time, be sure to run cargo build --release and benchmark with the executable in target/release.

Let us now look at a simple example:

In this tutorial you will learn about Cargo via simple examples.

This is a simple Rust cargo example.

Go to your Cargo.toml and modify it as follows:

Next create a file known as main.rs and add the following code:

Copy the code, build and run.

Here are the reference links:

Rustaceans have created several third party libraries related to cargo. You may want to enhance your cargo usage or simply find these abstractions more productive. Thus let's examine them.

This tool extends Cargo to allow you to add, remove, and upgrade dependencies by modifying your Cargo.toml file from the command line.

Ensure that you have a fairly recent version of rust/cargo installed. On Ubuntu you would also need to install libssl-dev and pkg-config packages.

If you wish to use a bundled version of openssl:

(Please check cargo's documentation to learn how cargo install works and how to set up your system so it finds binaries installed by cargo.)

Install a sub-set of the commands with cargo install -f --no-default-features --features "<COMMANDS>", where <COMMANDS> is a space-separated list of commands; i.e. add rm upgrade for the full set.

Add new dependencies to your Cargo.toml. When no version is specified, cargo add will try to query the latest version's number from crates.io.

Remove dependencies from your Cargo.toml.

Upgrade dependencies in your Cargo.toml to their latest versions.

This command differs from cargo update, which updates the dependency versions recorded in the local lock file (Cargo.lock).

The cargo-make task runner enables to define and configure sets of tasks and run them as a flow.
A task is a command, script, rust code or other sub tasks to execute.
Tasks can have dependencies which are also tasks that will be executed before the task itself.
With a simple toml based configuration file, you can define a multi platform build script that can run build, test, generate documentation, run bench tests, run security validations and more, executed by running a single command.

In order to install, just run the following command

This will install cargo-make in your ~/.cargo/bin.
Make sure to add ~/.cargo/bin directory to your PATH variable.

You will have two executables available: cargo-make and makers

When using cargo-make, all tasks are defined and configured via toml files.
Below are simple instructions to get you started off quickly.

In order to run a set of tasks, you first must define them in a toml file.
For example, if we would like to have a script which:

We will create a toml file as follows:

We would execute the flow with the following command:

A program that lists statistics related to the usage of unsafe Rust code in a Rust crate and all its dependencies.

Try to find and use a system-wide installed OpenSSL library:

Or, build and statically link OpenSSL as part of the cargo-geiger executable: 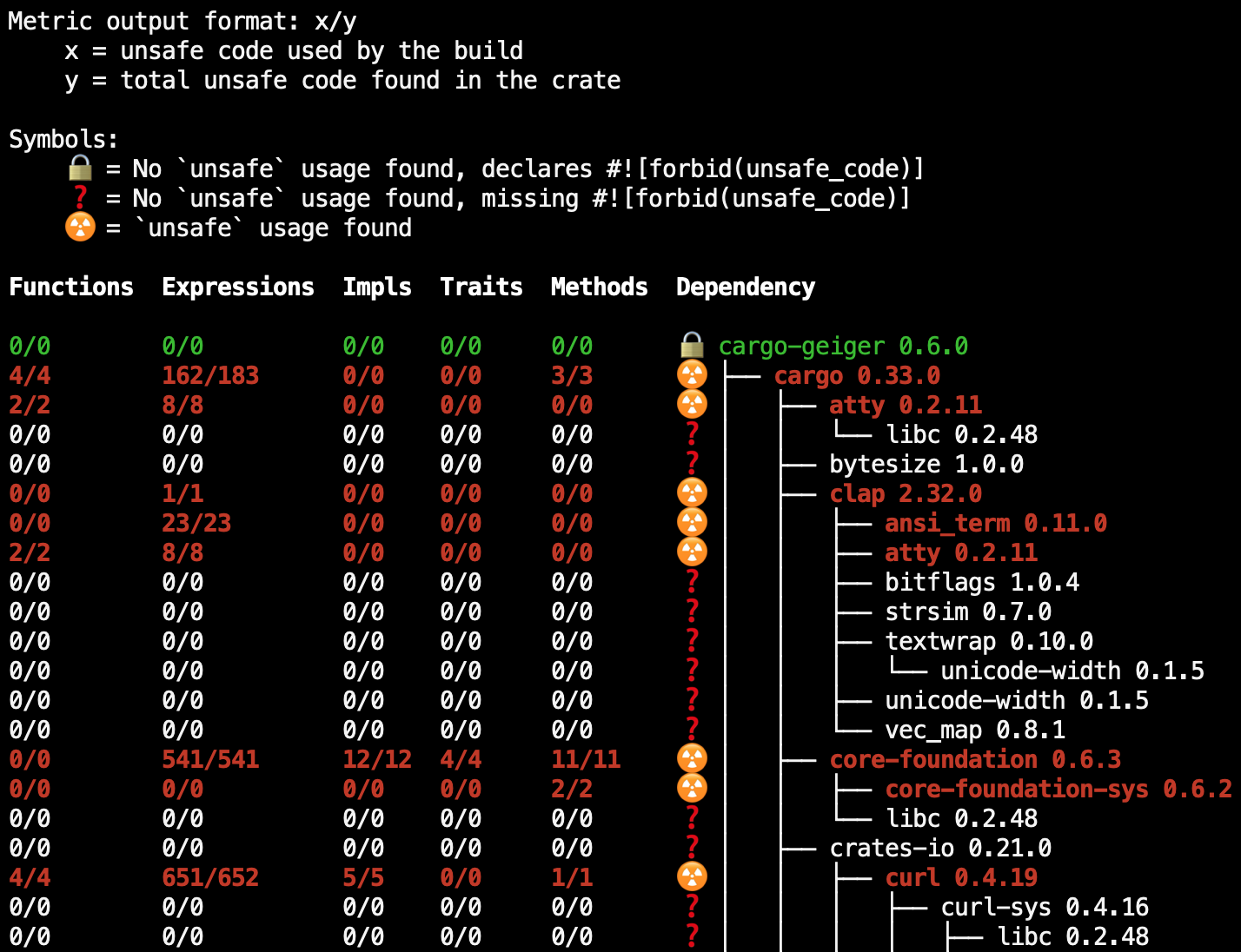 Why even care about unsafe Rust usage?

When and why to use unsafe Rust is out of scope for this project; it is simply a tool that provides information to aid auditing and hopefully to guide dependency selection. It is, however, the opinion of the author of this project that libraries choosing to abstain from unsafe Rust usage when possible should be promoted.

This project is an attempt to create pressure against unnecessary usage of unsafe Rust in public Rust libraries.